Today is the second anniversary of the day we moved to Arden, having signed on our house two days earlier. Two years ago was a day fraught with emotion and a few tears of frustration since we were moving ourselves--in the pouring rain no less. We rented big trucks from two different U-Haul places, but neither one of the trucks was available for us on the day we had reserved. Why go to the trouble of reserving a truck? We were stuck with what they had to offer--one smaller truck and a trailer attachment. Mark ended up making four trips back and forth from our Denver, PA, storage unit to complete the move. Cynthia and David, our friends who were the impetus for our move to Arden, brought us and the del Tufos (in moving hell of their own across town) some freshly fried cronuts to cheer us up.  Fried buttery dough with sugar did help. Cynthia didn't want us to hate her. She was pretty much solely responsible for every one of the teetering stacks of boxes. We call her the puppet master. She gets you to move--even if you didn't know you wanted to.

It was through her association that we decided to move to Arden. I've told some of the story before. Here is the rest. In December 2012, we called Cynthia and told her of our intention. She laid out a time line for us to sell our house and move to Arden in June. (This is where it gets eerie, because everything happened for us just as she dictated it to us over the phone.) After talking to us, she put out the call in Arden asking around to see if anyone was looking to sell in the next six months. Bob and Lon answered the call. I am not sure how serious they were about moving or if they were just putting out feelers. We came down in January to check out some houses in Arden. We weren't crazy about any of them. The last one we went to see was Bob and Lon's house on Green Lane. It wasn't listed. They didn't have a price, but we went anyway. They had chocolate covered biscotti set out for us which was a plus in my book. Also they had some pug art around the house, which made us think they had a pug--which they did. Their house was gorgeous, beautifully decorated in a European style that is more luxurious and ornate than anything we ourselves could pull off, but the bones of the house were good, and the kitchen and bathrooms had been recently updated. What really took the house out of the running for us was the scale. It was more house than we wanted. We wanted to downsize to something more manageable. This house had an in-law quarters. We had to say no.

Bob and Lon had reimagined and done work on another house across town--a smaller cape cod. Keri and Joe del Tufo lived there and loved it. The problem was that they had lots of house guests and could use more space. Even so, they didn't have the intention to move until Cynthia put a bug in Keri's ear. What if I could get you a house that was just like your house--only bigger? An in-law quarters would work for them. She showed them Bob and Lon's Green Lane house, and they decided they would buy it if certain conditions were met. I don't know what their checklist included only that, like our moving timeline, Cynthia seemed to oil the machine to meet all their conditions. Which left Joe and Keri's house available for purchase. As I have already blogged in Buying a House in Arden and Other Irrational Behavior, Part 1 and Part 2, we put our bid in for our house without ever setting foot inside. We saw the pictures, but what sold the house, even more even than the visuals, was the fact that we knew it had been redone by the same people who remodeled the Green Lane house. We knew Bob and Lon's work, their aesthetic, and we felt confident that the gamble was worth it.

So on June 27th, 2013, Joe and Keri purchased the Green Lane home from Bob, and we purchased the Hillside house from Joe and Keri. In a few twists of fate and two house moves later, Bob and Lon became Keri and Joe's current neighbor. We talked of doing a progressive dinner to see everyone's houses, but that never got off the ground. In kind of a backward way, I got the whole cast of characters together for dinner at our house. It had been years since Bob and Lon had been inside their former home, which had been their first home together.

Bob had moved into the house in 1999, and Lon joined him in 2003. Together they renovated the house, taking out walls, gutting the kitchen and upstairs bathroom. In 2006, they sold the house to Joe and Keri. We asked Bob and Lon to bring pictures of the house before the remodel, which they did. What fun to see what the house looked like. I need to get copies of some of the photos. Most interestingly, the kitchen (a smaller footprint than at present) had fire-engine red, high-gloss cabinets. We couldn't believe the chicken coops where the previous owners raised all types of fowl including turkeys. The landscaping was a lot more open than the mature plantings we have now. The house itself was sided in brown asbestos, which Bob updated with cedar shingles. They installed a gas fireplace near the kitchen which Keri and I raved to them about. What a great feature. Keri and I also both lamented that we didn't use the real fireplace which we found out from the photos used to be brick before Bob had it refaced in stone. We saw the difference of our master bedroom before the ceilings were vaulted. What a transformation. Bob and Lon put so much of themselves into this house. And the house that Joe and Keri bought. Bob and Lon had a photo album of things to show them as well.

We took everyone on a tour of the house as it is today and showed them some of the work we had done and told them of the projects we had planned for the future. They had forgotten some of the touches they had used. It was great to hear stories about how some of the changes came to be. What is also interesting is that all three sets of owners had different styles and aesthetics which the house supported. Bob and Lon decorated in their French Country lodge style with embellished antique furniture and old world charm. Their rooms made you want to hold a snifter of brandy and smoke cigars. Keri and Joe had a more relaxed cottage style with a stack of suitcases as a table and slipcovered furniture. I would classify our style of decorating as mid-century modern rustic--Mad Men meets summer camp. And the house accommodated us all.

When we bought the house, we inherited a black and white, group photo taken in the main room of our home during a birthday party in the 1960's. It was former owner Earl Brooks's, 70th birthday party. Given that we had two sets of former owners with us, we set out to recreate the shot. Something to pass on to the next set of owners when our time here is done. And, too, to commemorate a great evening spent with friends with whom we just happen to share the love of a house. 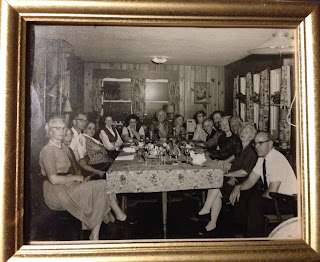 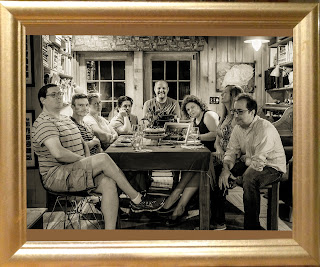 Posted by Jill Althouse-Wood at 11:05 AM