In 1910, the writer Upton Sinclair moved to Arden, DE, after the experimental Helicon Home Colony he started near Englewood, NJ, was destroyed by fire. His bungalow in Arden, referred to as the “Jungalow” after Sinclair’s muckraking book The Jungle, sits within a half mile of my present home. I pass it when I take a walk. It is perhaps because of Sinclair’s celebrity that an incident in Arden received national attention in 1911.

On July 30th of that year,  vengeful anarchist George Brown had eleven fellow Ardenites, including  Sinclair, arrested for playing baseball and tennis on a Sunday which violated the Blue Laws, which outlawed shopping and other leisure activities on the Christian sabbath. Those arrested that July day did not pay their fine on principle and instead went to the work pile for their sentence of eighteen hours. Upon their release, they celebrated with ice cream and even treated their jailers and the police who arrested them. (There had been ice cream at the baseball game. The ice cream man himself had been arrested.) The group went on to protest the Blue Laws and were instrumental in getting them repealed. The 1911 event was written up in a full page spread in the New York Times, the editor of which sent a reporter down to Delaware to cover the story. 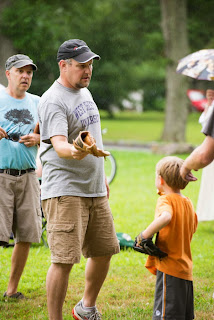 This past Sunday, Arden celebrated this famous event with a reenactment of the baseball game which included homemade lemon ice cream so delicious that it should have been a crime. It is this kind of hell-raising and outside-the-box action that is celebrated in the Ardens by those of all ages. I noted residents from 3 to 91 years of age at Sunday’s game. My 17-year-old daughter watched the game from a precarious seated position on a blanket with a foam donut at the ready. The day before, she broke her tailbone when she fell off the roof of our screen porch trying to sneak out after her curfew. Apparently, teens sneaking around to hang out in groups is another hell-raising tradition in Arden. As coincidence would have it, I recently opened up a historical book about Arden to see a photo of a group of kids camping out by the old pool (a dammed up section of Naamans Creek). Midnight swims were a big attraction to the youth of 100 years ago.

Today, the kids have a few whistleblowers out to get them. There are those, just like George Brown, who take upon themselves to police the activities of others. They call the police at the sound of a firecracker or to report the noise when gatherings of kids playing KanJam at the Gild Hall parking lot gets too loud. It is a right of passage for Arden youth to gather in places and at times that are prohibited, such as Indian Circle after dark. This is the story of youth everywhere, but perhaps more-so in Arden. Since its inception, Arden has attracted a population of rebel thinkers and doers. As one longtime resident put it, Arden was “a community that most nice post-war families would never have considered visiting, much less buying into.” How can we expect the children descended of a population of rebels to…well…not rebel? My daughter just happened to get caught, and in a humiliating way. The doctors and nurses at the emergency room did little to disguise their amusement when she relayed what had happened. And then there was the fact that she had to wake us, her parents, at 2 AM to drive her to the ER.

Mark and I are still getting used to the culture here.  Our former home was in such a remote location that if our kids did sneak out, they really wouldn’t have anywhere to go or anyone to do it with. We are learning what it means to be in community of free-thinkers at all stages of life.  We are contemplating the rules, the price of freedom and of creativity. We observe the sometimes heated banter that happens on open Arden internet forums and at town meetings. That, too, is part of the energy of intelligent free-thinkers.  The outcome of this particular incident is that our very lucky daughter will live to tell her story. She has made good friends here who brought her…what else?…ice cream to help her heal. We, as parents and citizens, don’t have the ins-and-outs of Arden delinquency  figured out yet, but ice cream seems to be an essential part of it.

Posted by Jill Althouse-Wood at 1:00 AM No comments:

What is Utopia exactly? What is an intentional community? Put simply, a intentional community is designed from the beginning around common ideals and the assumption that individuals within the community will pool resources and share responsibilities to work toward those ideals.  In The Ardens (Arden, Ardentown, and Ardencroft) those common ideals are the single tax (based on Henry George); the importance of art, music,  and theater; and the environment. Arden is a Tree City which boasts 50% green spaces including two forests and a 73% canopy.
If you know of my love of art and nature, it is easy to see why I would place myself here, in Arden. But I was drawn to the intentionality itself. My hometown of Lititz, PA was created, not because it was on a trade route or near a river, but as a religious community for the Moravians, a protestant sect that placed a high value on music. My ancestors came there and helped found the place. It wasn’t a closed or intentional community when I lived there, but that is where its roots were. Later, when I attended college, I sought out special interest housing. Instead of rushing to become an adult in my first apartment, I chose to live in housing with a purpose. In my case, it was honors housing, but we had activities with all the houses, many of which were formed around cultures (The French House) or interests (The Music House).
And too, I have a fascination with the Revolutionary Period of our country’s history. I’ve read all the biographies of our founding fathers, visited the homes of Washington, Jefferson, and Adams. I’ve been to Williamsburg no less than fifteen times. Why am I such a groupie of this time period? These men got to invent a freaking country! They got to start from scratch and found a place based on their ideals. Talk about intentionality.
Probably the biggest influence on our decision to move to Arden was the many years we lived without community. In the eighteen years leading up to our move, we lived in a spot which wasn’t accessible to much. We had to travel five miles to a grocery store, over twenty miles to attend a church that matched our beliefs. The school district where our kids went to school was made up of a lot of small little burgs and villages. There was no centralized town around which to rally. Added to that was the fact that in the most recent high school mock election, Obama came in third to Romney and Paul (who was a write-in candidate). The sense of isolation and the fact that our liberal ideals were so far removed from the population made us feel very lost. We were not only looking for a place to belong, but for a place where we could make meaning.


A lot of press has been given to living the intentional life with an emphasis placed on the individual. Not everyone can make the move to an intentional community. My hope, with this blog, is that those who are curious about life lived in such a place can have their curiosities satisfied and move on to new questions about what makes meaning in their own lives. What makes community? How can we satisfy those very human needs? Perhaps we can have a community right here. Feel free to join the conversation in the comments section.

Posted by Jill Althouse-Wood at 3:28 PM No comments: